……… but much safer and much cheaper. A study by JMPT in 2010 titled ”Manipulation or Microdiscectomy of sciatica”, found that patients that had disc herniation’s in their low backs got the same relief with Chiropractic, as those that had surgical intervention!!
A common, but very debilitating, spinal complaint that millions suffer every year, with too many relying only on medication, for too long and ending up being told surgery is the only option. The rate of disc operations in the US is increasing year on year, with around 500,000 being performed last year.
The main aim of the surgery is removing the part of the disc that is compressing the nerve and causing the sciatica, or fusing the whole spinal segment (two bones). In this study the individuals were able to remove the nerve compression with the chiropractic care, thereby avoiding the knife.
Unfortunately too few know about Chiropractic care to realize that if after the medication and physiotherapy hasn’t worked for the sciatica, they think they have no other option than the operation.
In this study they looked at patients who didn’t get success with these options, and funneled them into Chiropractic or Surgery. Both groups had the same outcome, with the Chiropractic option being much, much safer and much, much cheaper. So don’t resign yourself to thinking that surgery is your only option. 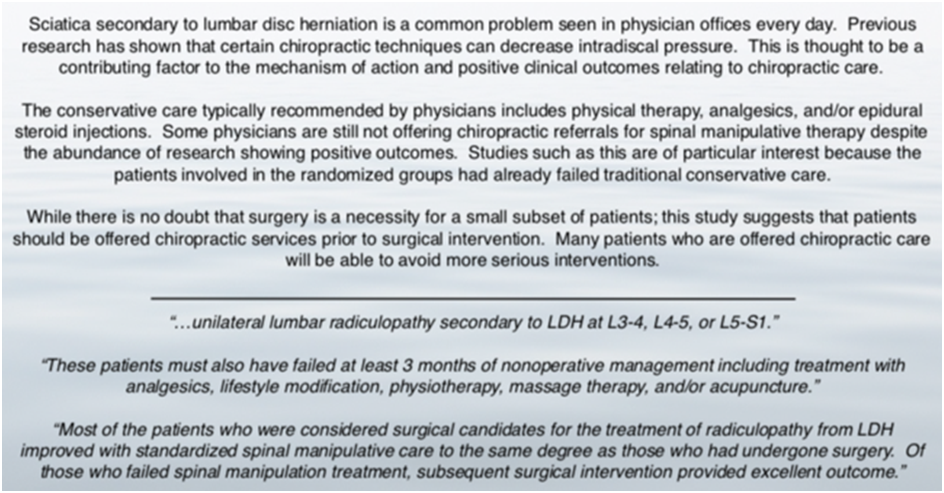 Now I do refer patients for surgery from time to time, and if the patient isn’t responding to Chiropractic care,  or the neurological signs are deteriorating, or if bowel/bladder control is starting to get affected, then they still have the option of the surgery afterwards.   However if they have the surgery first, the back is changed and often much more difficult to fix with the manual adjusting. Leave yourself with as many options as possible, and always opt for the safest approach first.

The thing was that they found that in the Chiropractic group 60% no longer needed the surgery, with the remaining 40% where the sciatica remained, were still able to have the surgery as an option.  Where the study was done in the USA if this model was used it was estimated to save $15 billion dollars in direct health costs per year (  not a small number).

The other issue with the surgery is the high failure rate where the person ends up with a chronic failed back. It is reported as being around 20%.  Contrast this with a 2014 study, which showed using Chiropractic caused clinically significant improvement of sciatica in 88% of disc patients, with no reported adverse side effects.

What often happens with sciatic pain is the person goes to their general doctor, where they are told to take medication for it. While this reduces the pain and can be helpful in the early phase, doesn’t address the mechanical problem which prevents the disc from healing naturally. So if the sciatica is still there, usually the next option is the spinal surgeon, with the patient not realizing that there is another step along the way that can be tried, one that is now shown to be as effective, and safer.
Chiropractic care improves spinal mechanics (movement), which reduces the deep inflammation around the disc, decreasing the intra-discal pressure, reducing the nerve compression, allowing the nerve to heal, and the sciatica to reduce. This is why the outcomes were so good.
So if you or any of your friends or family have been told that surgery is the only option, be aware that there is another option that your not being told about.

Cameron Finlayson is a Chiropractor in Auckland, New Zealand.  He has 21 years of experience. 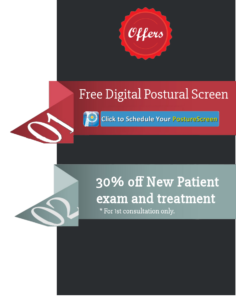